SPOILER: This post contains more moans and groans than travel advice but I promise this will improve as my health does.

The other half was running the Brighton Marathon on Sunday but we had to go up on the Saturday to pick up her marathon pack. Our first stop on our journey was London Victoria.

“Daisy why is the bloody train not on the board? We have ten minutes to get on the train and you haven’t even got the reference number for the tickets. We are gonna be late.”

Even after just a few words, you can probably tell that my mood was quickly deteriorating. My stomach was cramping again and I knew that my high spirits wouldn’t last long.

After a few strops and several toilet breaks, we were in Brighton. The weather was warm and bright but I was wearing a bloody jacket and we still had a mile walk to the marathon pick-up point…Yay for me.

At the Marathon Village, deck chairs were laid across the beach in front of a big screen showing the Mini Marathon.

After a few minutes I found myself nodding off and before I knew it Daisy had returned.

On our way back to the train station, we explored The Lanes and also come across Trafalgar Street. Trafalgar Street is directly beneath the train station and is a hip area brimming with quirky vintage shops and cool little restaurants. We were looking for somewhere gluten free and there were plenty of options. I spotted Breeze Brasserie, a chilled out restaurant with some good gluten free meals. “Fancy eating here for lunch, Daisy?” Of course she don’t, unless it says VEGAN, HEALTHY, AVACADO. Oh wait, Daisy spots a sign that says “proudly independent” and what’s that? She wants to eat there now? Alright then. 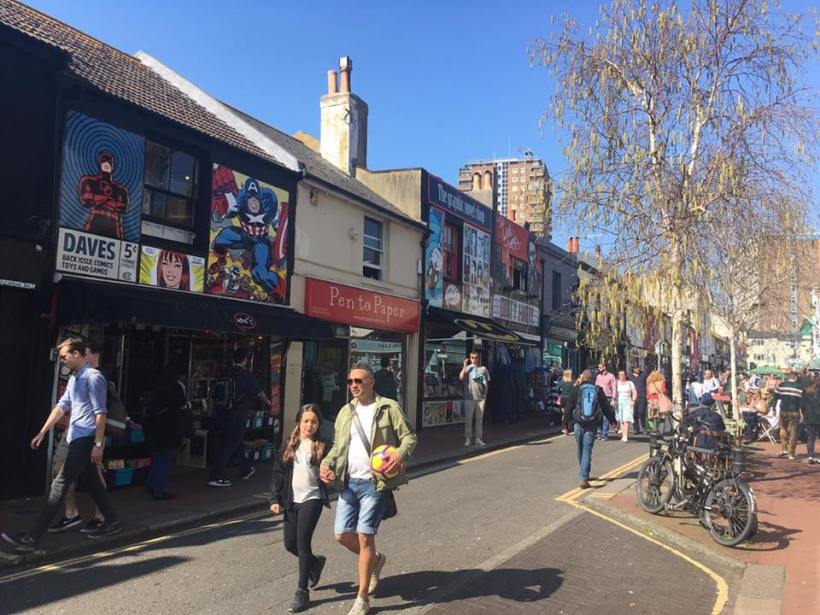 Breeze Brasserie has an easy to read menu for allergens and after a quick word with the waitress to say that I am coeliac, I was ready to order. 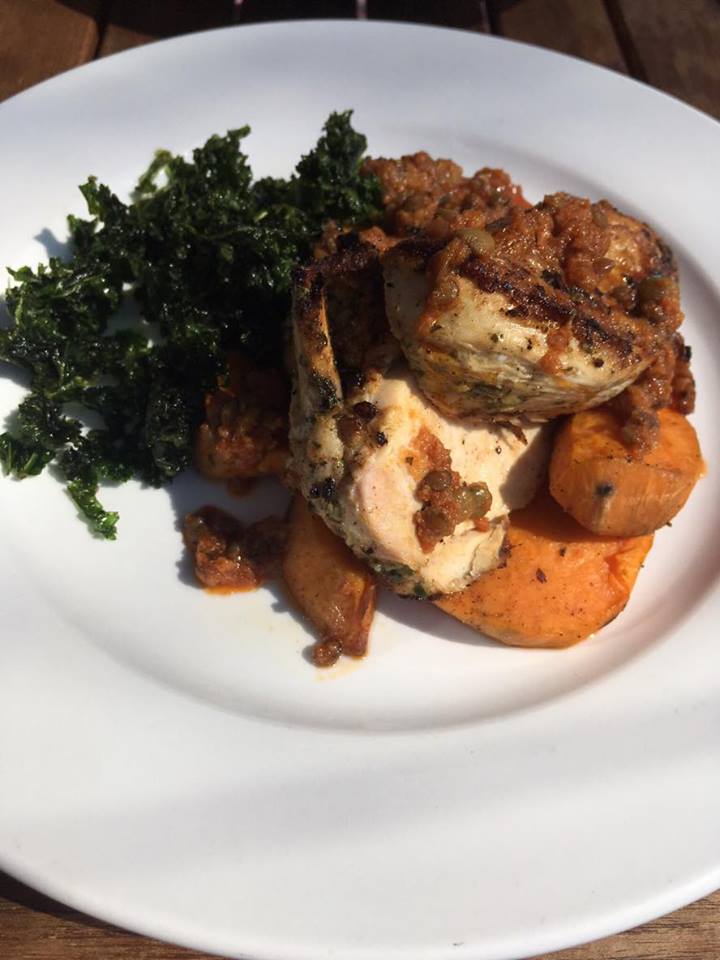 I went for the pan roasted chicken breast with rosemary infused roasted sweet potatoes, a chorizo and lentil dressing with a side of crispy kale for £11.95. The dish was completely gluten free and I also had a Crabbies ginger beer to wash it down with. The chicken was moist and the flavours complimented it very well.

After lunch we jumped on the train to Gatwick. It’s got to be said that it feels so weird entering an airport and not getting on a plane but the airport’s Premier Inn was the closest place that was left that didn’t cost a fortune. So, anyway, we checked in, booked a table and then had a little nap before our meal. I really wanted to continue napping but we had to get Daisy some food, otherwise there was no way she was running that marathon.

For those who don’t know, Premier Inn offers a two course dinner, drink and breakfast for £24.99. If you’re a pig like me then you can pay a £2 supplement for the rib-eye steak, which is exactly what I did. Prawn cocktail for starter with gluten free bread and the rib- eye for main. I was told that everything was gluten-free and that the fryer is only used for chips.

Sunday morning, the alarm goes off nice and early. Before the alarm I was already out of bed on the bog. Hmm, that so called gluten-free meal at Premier Inn might not be as honest as I thought. Obviously I have now emailed the hotel but still haven’t had a reply.

Sorry, back to the story – feeling absolute scrap.

All that’s going through my head is that I’m going to be stuck on this train to Brighton with hundreds and hundreds of marathon spectators crammed together like sardines.

What’s this? The train is cancelled.

“If the next train is rammed and I can’t get on, you jump on Daz, and I’ll get the later train.”

I said this over and over again, reassuring myself. Luckily enough not only was there a toilet on the train but it was also surprisingly empty. I reckon that the man above saw me stressing and gave me some pity. That, or the people jumped on the train before when they saw that the other was cancelled. I ran straight to the toilet, my stomach was burning, I felt sick and had a huge headache.

I’m pretty used to all the above on a daily basis but normally I’m resting at home feeling sorry for myself rather than struggling in public.I try and feed my mind with positive thoughts but it always comes back to the negative thoughts eventually, just frankly I’ve had enough of feeling this way.

Sorry let’s get back to the marathon.

Daisy runs by, smiles and off she goes. Google maps at the ready and off I go to Hotel Pelirocco to check in.

After seeing Daisy again at mile 12 and chatting to some very friendly spectators along the route, my plan now was to sit by the beach right by the TOILETS (yup it always goes back to where those toilets are). I mean there was always the sea in case of an emergency… I’m just kidding…or am I?

On the beach I fell asleep, dehydrated and burning. Eventually I woke up to the voice of a runner who completed the race in an incredible two hours forty.

By the time I got Daisy some food and some juice, pop to the toilet, it was time to see her pass the 25th mile. Our friends Ashley and Emma with the kids and dog in tow also arrived to see Daisy cross the finish line but I had no phone signal to contact anyone.

Mile 25…Daisy ran by… What a relief that I didn’t miss her.

I then planned to meet her at the Marathon Village at letter D. Luckily I bumped into Ashley and Emma on the way. It was a huge relief to actually see them, Emma understands what I’m going through so it’s nice to have sometime to chill with like that. By this point I was a little more at ease and Ash was being my mum asking me if I had eaten and drank etc.

: and frankly pissed off

Of course Ashley, I’ve had a little something to eat and drink (hmm right). Even though he bought me a gluten-free paella and water, I couldn’t really eat much.

A few hours of beach bathing with the gang and it was time to head along the seafront for our second hotel of the weekend.

Hotel Pelirocco is a themed hotel and our room was Star Wars themed. I can’t say that I’m the biggest fan of Star Wars but it was affordable and very different. The rooms were kitted out with a bunk bed, small double on the bottom and a single on top. Star Wars props were scattered around the room and there was an entire collection of Star Wars DVDs. But the thing that really made this room super cool was the Darth Vader outfit.

4am wake-up call needing the toilet. I won’t go into details (no one wants to hear it, trust me) but if you have had food poisoning you will understand. Train is at 3pm and I’m now panicking that I’ll be stuck on the toilet all day, majorly panicking.

: a very helpful and reassuring Daisy

As I write this I can’t help but think that Daisy deserved two medals this weekend, one for running the marathon and the other for dealing with a 29 year old verging on 59.

Moral of the story, do your research, tweet some fellow travellers, find a good gluten free restaurant, try to live in the moment and don’t worry about things that may or may not happen.

If you don’t feel great, try to eat and if you can’t eat then make sure you at least keep hydrated, unlike me.

If you’ve managed to get to the end of my grumpy post, then you deserve a medal too!