When you go on holiday to Finland (or any other country) to search for the Northern Lights, be aware that the chances of seeing them are slim. After all, if they were that easy to find they probably wouldn’t be one of the most sought after natural wonders of the world.

Ok so I’m going to ruin the ending – we didn’t end up seeing the Northern Lights. It was our third time unlucky.

Anyway, let’s start from the beginning.

My brother, his partner Becky, Daisy and I went to Finland in February for 6 nights. The plan was to find lots of fun things to do in Finland to celebrate my 30th  birthday (early 30th – 6 weeks early to be precise) whilst searching for the Northern Lights.

FYI: With the sheer amount of gluten free food available, I’m going to discuss gluten free restaurants in Finland in a separate blog – just keep your eyes open for that one!

We began our trip to Finland in Helsinki; the hip Finnish capital. When you hear of a capital city you usually expect it to be a busy city, right? Well that weren’t the case with Helsinki. We arrived a week before the February school holidays so that probably helped. It may be different in summer but there were no crowds of tourists flocking from one site to another on mass nor were there loads of “tourist trap” style gimmicks. Helsinki is pretty spacious and it felt pretty chilled out – perfect if you can’t stand big crowds like me.

Whilst in Helsinki we stayed at the Hotel Lilla Roberts, a chic design hotel in a great location. The room was a decent size and I received a lovely box of chocolates and a note to say happy birthday – thanks guys!

As we were only in Helsinki for one whole day we didn’t visit too many sites but this is what we covered:

Helsinki central station: Helsinki’s first railway station and was built in 1862. If you’re travelling into the city from the airport jump onto the train – not only is it cheap it’s also quick and you see the outskirts of the city. I suggest downloading the VR RAILWAY app to purchase tickets – it’s easy to use and convenient. 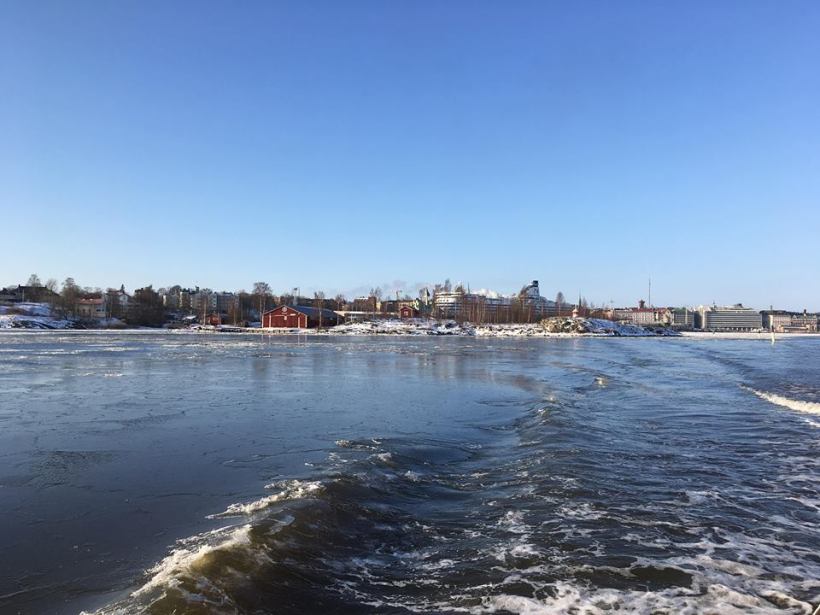 Suomenlinna is a sea fortress that was constructed in the 18th century and spans over six small islands which are each connected by bridges. Around 800 people reside here today and visitors can access the fortress by a short ferry ride which is around 5 euros return – not bad if you ask me. When visiting in winter it is quite fun riding through the ice on a ferry. Do bring some snacks as most restaurants are closed during the winter. If you’re here in the summer bring yourself a picnic or dine in some of the charming restaurants. With museums, shops, historic architecture, and nature walks, you could easily spend the whole day here unless it’s -10 degrees (which it was for us) and then you might want to head off and get in the warm.

Ok so I generally thought Helsinki Cathedral was constructed a lot later that it actually was. Completed in 1852, this cathedral has a fairly vast and modern interior and it reminded me of the Hallgrimskirkja church in Iceland (the interior not the exterior). Be careful if there is snow/ice as the steps can be very slippy – trust me I know.

We spent the rest of our time in Helsinki exploring the shops and looking at homemade gifts. There are also some great places to eat and drink which I will cover in my other blog

I know what you are thinking- there is no chance of seeing the Northern Lights in Helsinki. Well. Helsinki was just a stopover to our next destination…

The morning on the way to the airport:

So I know I wasn’t going to talk about food etc. but this is a must, as our flight was earlier than the breakfast timings, the hotel made us a breakfast  to go which included a sandwich (gluten free obviously), a juice and some snacky bits which I thought was really nice. We were now headed to Levi – deep in Finland’s Lapland region – where the chances of seeing the Northern Lights are pretty high.

So first things first – Levi is a lot colder then Helsinki, so be prepared for everything to freeze including nostrils and eyelashes. There’s a coach that collects visitors from the airport and takes you straight to your hotel, its cheap (14 euros return) and a pretty journey too.

First things first, you ask why is it called the crazy reindeer? Well the more you walk through the hotel the more and more reindeer themed things you will notice!

So the hotel is huge. It has 2 on site restaurants and a further 13 in and around the town, a bar and lounge, a small spa, a rock café, a gym, and (my favourite part) the massage chairs in the bar. While we waited for check in we had a little wonder around and found a huge pile of snow so the obvious thing was to climb it, right? Finally it came to check in and to our shock we had been upgraded to a 3 bedroom apartment each, yes each – so if Daisy snores at least I could move to one of the other rooms (result).

The sun is setting so we head of out in search for the Northern Lights. the good thing about Levi is that you don’t have to walk to far to get out of the light pollution.

So we headed of down to the lake that is close to the K5 Hotel which is about a 15/30 minute walk depending if you stop for a quick gloggi to warm you up.

There’s a few apps you can get on your phone to find the lights. The one I suggest is Tonttula as it’s pretty easy to follow and the hotel said it has never let them down.

So the next day we visited Luvattumma ice gallery and hotel – a 15 minute taxi ride (£20 each way), or, a nice cross country ski trip from Levi. There is a little café inside for a hot beverage or an alcoholic drink but avoid the gloggi as it was very weak and lacked flavour. There is also an ice bar, children’s slide, maze, ice chapel and some ice rooms if you are brave enough to stay the night!

We booked our snowmobile ride in advance on the Levi tourist office website. We chose the evening ride for a higher chance of seeing the northern lights. Even though they kit you out with a thermal all in one, your hands and feet get very, very cold especially when you’re stupid like me and don’t stick on the heaters for your hands – I honestly thought I had frostbite by the time we got back.

The all-around trip is about a one and a half hours and you stop half way in a little cabin surrounded by reindeer where you get a hot drink and a hot doughnut to warm you up. The experience was incredible and I would absolutely do it again just next time I’ll stick the hand heaters on.

We decided to not have a lesson as we were only skiing for one day. I’m glad we didn’t because it wasn’t as hard as I thought it would have been. That being said if you are going on a ski holiday or even decide you want to ski for a day, try and find a practice ski centre near where you live and have some lessons first.

Ski Equipment: 36 euros for all equipment for one day.

In order to enhance our chance of seeing the Northern Lights in Finland, Daisy surprised me to a night’s stay at the Golden Crown Igloos, just outside of Levi – what can I say, I’m spoilt.

The person that designed them is just a pure genius.

Each individual igloo has a shower, toilet, a little kitchen area, sofa, and an adjustable bed to make watching the northern lights more comfortable. The glass is heated so that the snow doesn’t set onto the glass. The bottom parts of the glass are frosted for privacy but the higher parts aren’t so be careful if you like to walk around in your birthday suit. There’s also a restaurant on site that you need to book for in advance. Also bring the marshmallows as there’s a little wood fire inside a cabin for toasting and making smores. If you are gluten free bring your own sticks.

The hotel has a detailed Northern Lights app that is based just on that area. The only negative thing is that you have to pay for it. Unfortunately it was too cloudy but we did wake up a few times to check on the sky. It is such a wonderful experience to sleep beneath the great outdoors regardless of whether you see the Northern Lights or not.

So after one of the best holidays I have been on, it is time to return home. I bid Finland a farewell and thank it for a wonderful experience. And no doubt I will see it again at some point – hopefully to find those lights!