So Pokhara is totally different from Kathmandu, Lakes, less pollution, less traffic , more people trying to sell you stuff , and hipsters with their loose Thai fisherman pants everywhere you look. So I really like the scenery I really enjoy the restaurants but I cant help but miss Kathmandu, there’s just something about it I can’t quite put my finger on. You might feel differently, I’ll let you decide.

The location is amazing the accommodation is definately an upgrade from Kathmandu , and the room is spacious and clean with colourful walls and a large mirror. There’s a western toilet and a shower which is usually cold but just talk to reception and they will sort it out. Wifi connection in the room was pretty decent as far as interenet goes.

You can get food there and even book buses , tours, and activities. We had a delicious Dhal Bat but didn’t need to make any reservations.

When we arrived we had a slight issue with the booking; I still havent had a reply from Agoda but supposedly I had booked two rooms even though my app said I had only booked one. At least it was only an extra $8 I guess but still a lot considering our tight budget. Amrit, the manager of the guest house, picked up Daisy’s lugguage when it was put on the wrong flight. He’s a nice chap with a good sense of humour which made the stay even more comfortable. 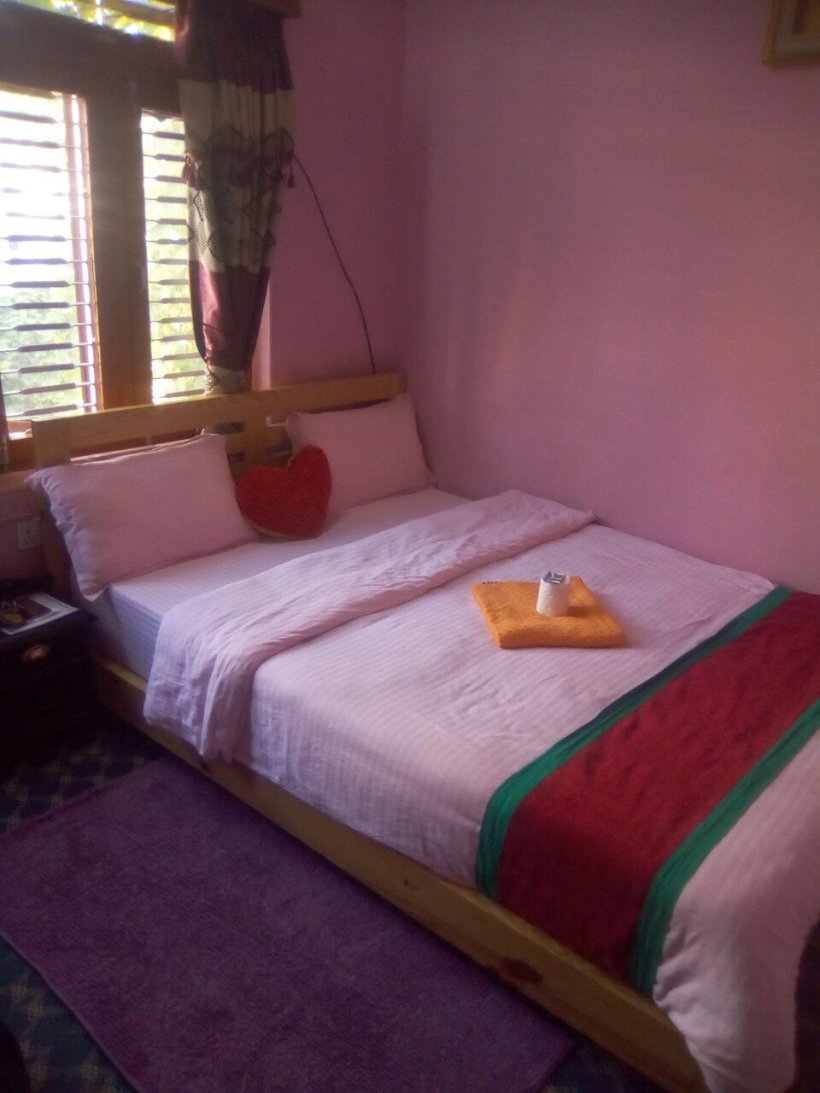 This was our first dinner in Pokhara. We chose it as it was in a blog about gluten free food in Pokhara.

banana lassi made with coconut milk

A good start to the trip. 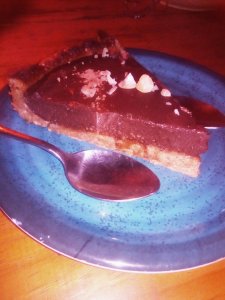 Located on Phewa lake, we ate here for breakfast.

I had american style Buckwheat pancakes with fruit salad and pancake syrup (2 pots) because I’m greedy and I love syrup.

This place is slightly pricey but the pancakes are really filling so you might only need a small lunch, plus I was happy to find out that they wash the pan between each batch of pancakes.

A Korean restaurant that is at the very far end of Phewa Lake. I picked this place as there is a bbq platter on the menu which you cook yourself, meaning I was in control of cross contamination.

I had the pork, which is finely sliced raw pork belly with no seasoning or sauce.

it also came with potatoe, onion , kimchi, and a bbq sauce (which I didn’t eat), lettuce, some veg in a sauce (which I also didnt eat), and a seasme oil. I also ordered a portion of rice and in total it cost around $8. I also ate here again later on in the week as it was that good.

I opted for the gluten free breakfast:

Buckwheat Galettes (french style pancake) avacado, grilled mushrooms, lettuce, and two of the finest poached eggs I’ve had in a while, washed down with a pot of french press coffee all for RS460= $4. I also ate here twice , second time I ordered the ham, cheese, and mushroom crepe.

‘So you’re by the Lake so why not try the grilled fish’, I think.

‘And this cafe is a stone throw away from the lake, let’s go here’.

Unfortunatley this is the place I got glutened, my own fault as I slipped the ball on this one. The fish was tasty and really well cooked, well apart from the fact that it did contain gluten. It was served with chips and a veg in a gravy which had cornstarch so thats all fine. But inside this fish it had a weird veggie filling which I’m almost certain contained gluten, I ate the fish, not the inside. I didn’t want to seem rude. If you do eat fish and do want to try it just ask for the fish plainly cooked and with no sides etc . p.s it was a boney fish.

Avoid this place like the plaque and don’t be fooled by the gluten free sign. This restaurant is dissapointing. Not only did it seem like they had forgotten our order, when our order did finally turn up, Daisy (who is vegan) was given a chicken dish and even after we questioned it he told us it was in fact mushroom which was a complete lie. The female waitress then came over and asked whether she ate chicken. No shit sherlock hence the reason she ordered mushroom. When paying for the bill she even tried adding on extras and I even had to say mushroom dish so she didn’t try charging for the chicken.

Indian cuisine really cheap and a local restaurant. I had the paneer tikka masala and rice which has to be one of the best currys I have had.

Don’t miss out on this place, its great for lunch/dinner and the portions are a really good size.

Located on Phewa Lake, this is an outdoor fastfood place open in the evening. Just imagine a man with his bbq and a few seats around it. What could be more of a ‘local experience’ than this? Each kebab skewer costs RS 100 and is really tasty. I did try the side sauce and I was fine but I’m unsure what’s in it apart from garlic, chilli ,sugar, and tomato ketchup.

Rowing boat: You can rent a rowing boat on Phewa Lake for as little as Rs500 an hour. It’s not a great deal more for the whole day but if you have a partner like mine you will be doing all the rowing, so an hour is plenty.

Boat ride: Take a boat ride over to Barahai Temple, a tiny temple located on a small island that is visible from lakeside. That’s about it really. It’s good to kill an hour or so and it’s cheap to get across.

World Peace Pagoda: No matter how long you have in Pokhara, the World Peace Pagoda is well worth a visit. It costs RS550 pp eachway for a boat ride across to the starting point where you will then take a 45 minute hike up. The pagoda itself is absolutely stunning. Be sure to bring your sunglasses because when the sun hits this pure white building, it is blinding. I suggest getting a one way ticket on the boat as you can take a scenic route down to a main high street, which is a short walk to Gupteshwor Mahadev Cave (RS100 to enter).

Gupteshwor Mahadev Cave: If you’re scared of the dark or afraid of tight spaces then this cave is probably not for you. You enter this wet cave, ducking under low archways which lead to a narrow tunnel where you have to climb over pipes whilst dodging the people who are trying to leave. You finally come to a bigger entrance of the cave, shuttered up with dodgy rusty scaffold and lots of wet cables, which is the main attraction oferring a view of the Devis Falls entry point. It’s worth visiting just to get the old heart ticking.

Devis Falls/Davis falls: Named after a woman who went for a bath and ended up getting swept away by the waterfall and died. Devis falls is a popular landmark in Pokhara and the water connects down into the cave below. Though cheap to enter, you can’t see a great deal as it has a fence around it. If you don’t mind tight spaces head to the cave for better views.

I need to say this as when I see ‘gluten free’ on a menu I assume that the restaurant understand exactly about what gluten free is and the issues around cross contamination. This is not the case at all. Coeliac (Celiac) isn’t known in Nepal and the menus seems as though someone said ‘ok, so this doesnt contain gluten so its gluten free’. The 20ppm doesn’t count here so keep this in mind and just order dishes that wouldn’t normally contain gluten. Stay clear of fried food unless the only food fried is gluten free. I know this may sound frustrating but if you live being scared of being glutened you will never visit this beautiful country and honestly thats worse then being glutened. I’ve been glutened twice on my trip in three weeks. That’s not bad really considering I use to get glutened at least once or twice a week back home on some occasions.

Gluten free signs in Nepal are ok but don’t always rely on them.